Tropical Storm Fay has really put a damper (no pun intended) on my gardening. Based on weather.gov, we have gotten somewhere in the neighborhood of 8 inches of rain and it is still coming down. I've been annoyed with the weathermen who continue to report from the Kissimmee area of Osceola which hasn't been as hard hit and forget that Osceola is very large and the eastern side is getting weather the likes of Brevard which is flooded.

At my house the rain started at 430a.m. on Tuesday and has not let up for more than 30 minutes since that time. 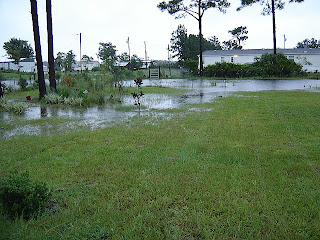 The pond is outside its banks although not too bad today. Last night when I went to bed I expected to wake up with water licking at my steps. Luckily the rain continues but not with the force or intensity that it had yesterday. However, I fear that some of my plants will wind up drowning since it seems unlikely that what is here will be going anywhere anytime soon. 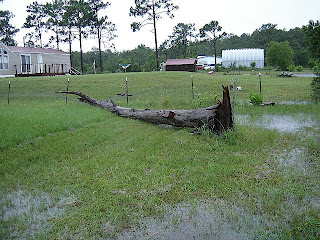 The pine snag that was the post for my bluebird nesting box was blown down and squished three sections of the side fence. I will put a post up in the same location for the nesting box but it certainly won't be as natural a look, and I won't have the benefit of watching the woodpeckers and other visiting birds high up in the tree. Hopefully the bluebirds won't be put off by a new modern look of a purchased mounting post.

Now I am a bit concerned about the other pine snag as it is taller and if it comes down in a similar fashion will hit the carport or even the house. I might have to get a tree trimmer to cut it off a bit so it won't be so far reaching. Perhaps in the future since the tree that fell was hit by lightning during Hurricane Charlie (based on my neighbor's observation since I didn't live out here then). The newer snag was hit by lightning just last year in an afternoon storm (based on my observation when my hair stood on end when the lightning hit).

Prior to Fay's unending visit I had spotted the mangrove sapling I planted in the bog end of the pond area. It is still ALIVE! We got inundated with rain about 2-3 weeks ago and the extended pond area quickly filled with water.....much higher than I ever expected. It completely covered the mangrove sapling. The pond slowly receded and the mangrove reappeared. Needless to say, it is back under. Keeping my fingers crossed that it will reappear sometime in the future.
Posted by Loret at 3:49 PM No comments: Links to this post