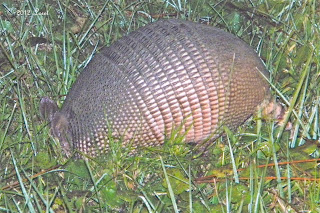 FINALLY! Tanner was out before dawn this morning but it was very close to his time so I sent him leash-less off into the yard. After a while I heard a lot of commotion and barking so I went to the door to get him in. He was at the fence, barking into the backyard. Could the deer be there? Or is it just one of the rabbits.

I called him in and got the flashlight and shined it around back. WHOA! It's the Armadillo!!!! HORRAY! I ran to get the camera and crept up and took a few photos while (s)he quickly moved along munching away. One photo with it standing up shows the reason for a common name "Turtle Rabbit". I just wish it was a better shot, but with the flashlight between my knees, it isn't too bad.

I need a lighting director or maybe just a grip to hold the flashlight! 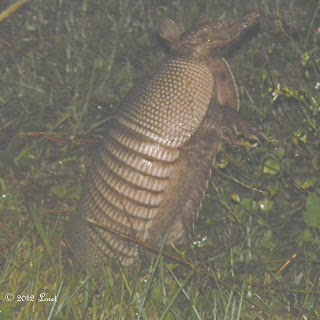 Posted by Loret at 6:26 AM 2 comments: Links to this post

So much for the Professor and Maryann 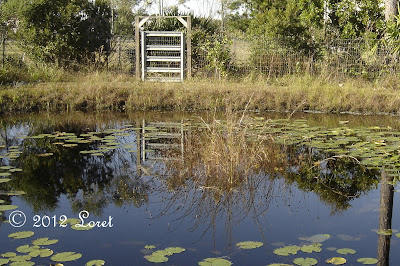 It's GONE! My island is GONE!

I took a walk back by the pond today and was surprised to see that my tussock had sunk so only the tops of the very tall grasses and sedges are showing.

My island appeared out of nowhere back in September 2011 shortly before Hurricane Irene, which was pretty much a non-event for me. It's now 2012 and shortly after Hurricane Sandy that, with the exception of losing my American flag to wind, was thankfully another non-event here. The island has gone back to where it came from...the bottom of the pond.

Just a month ago the tussock was crowded with lots of natives, perfect shelter for wildlife but I suppose the fish are enjoying it all now.

I'm rather sad to see it go. The Lord giveth and the Lord taketh away.
Posted by Loret at 10:16 AM 2 comments: Links to this post