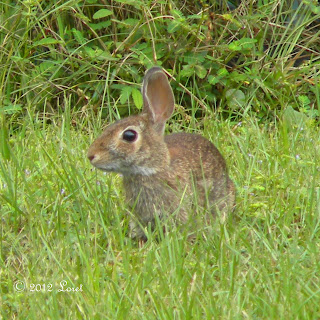 The weather email alerts starting hitting the inbox early this afternoon. The first two were concerning the western part of my county out by the attractions and I quickly deleted them, too far away to be a concern.  Then the third arrived mentioning my town specifically.  I could hear the rumbles of thunder off in the distance.
Severe thunderstorms are practically a daily occurence in Florida during rainy season.  Most arrive with their gusty winds and torrential rain but pass through quickly....a distant memory in short order.  Today's was no different and lasted all of about 10 minutes.  A non-event, at least at my house.
I like the smell of nature after a cleansing rain, so I gathered up some cardboard that needed to be put in the recycle bin and headed out to the patio.  Over next to the well pump I spotted a bunny (shown above).  Then I looked out back in the dog-free area and saw another, both Eastern Cottontails.  I spotted a third back by the compost bin, shorter ears and darker fur, so likely a Marsh Rabbit.  Was it water that fell from the sky?  Or did it rain rabbits?
There they sit quietly munching away.  I find them simply adorable when they wiggle their noses, contemplate for a second or two and then hippity hop a bit to find another snack.  Mind you, when I get my veggie garden started up again I may have a different opinion about their cuteness.
While taking a photo or two I heard a hawk in the distance.  A cardinal flew by and landed in the winged sumac, enjoying the drupes of fruit.  A blue jay landed in the oak tree picking around for who knows what. The mockingbird was at the beautyberry and overhead I watched a wood stork soaring past and a vulture on the hunt overhead.  I quickly offered movement so he wouldn't take too close a look at me.  It seemed so quiet and yet there was such a flurry of fun activity for me to enjoy.  Nothing like nature after the storm.
Posted by Loret at 4:26 PM 2 comments: Links to this post 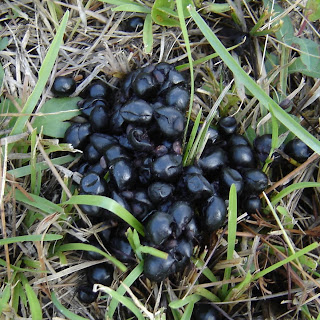 It would seem I have a new garden visitor (or two). I haven't actually seen him(her?), but I saw unmistakable signs today. Down close to the pond, I found two piles of scat…deer scat.

I haven't seen deer in the neighborhood for quite a while. They use to cross my street pretty regularly around dusk, just down at the wooded area line about 3 properties away from me. I suspected that they had a regular corridor there.

"My" deer must be really something, as they have to hop a 4-1/2 foot fence to get in. I guess since I restricted the doggies to the front of the property with the new fence that there is no longer the scent of what I suspect the deer would view as a type of predator, or a least a pest they could do without.

So, now I will have to watch at dusk, dawn and in the middle of the night with the hopes of seeing my new garden critters perhaps watering down at the pond. Based on the looks of the scat, it appears they are enjoying the ripening drupes of the winged sumac (Rhus copallinum). Welcome to my world.