Sometimes my own senses come first 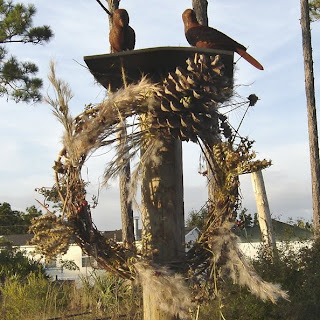 Twitter has proven to be a great educational experience for me. I tweet with a grand group of nature people who share interesting photos, web links and thoughts on ecology and living green...as well as their fun interpretations of life.

Recent pics from one of my favorite bird photographers, @Kerrifar showed birds eating off a wreath she had hanging in her yard. The birds seemed happy, the wreath was creatively decorated with seed covered suet decor which looked pretty and I thought...heck, I could do THAT!

Now mind you, in Florida you can't really provide suet encased in birdseed as attracting decorations...the sun just turns it into a gloppy, mold ridden mess (a lesson learned early on with my hanging suet feeder), but I had other ideas!

I have native grapes on my fences and the vines tend to get out of hand at this time of year. I cut back some and created a grapevine "base" for my bird-feeding wreath. I tied a fallen slash pinecone to the top. I added some sprigs of various native plants which have recently gone to seed: Carolina Redroot, Black-eyed Susans, Bushy Bluestem, Tall Elephantfoot and a few different forms of sedge. I then added some color in the form of berries sprigs from the Gallberry and Dahoon holly.

Now, what makes me think the birds will flock to my wreath when they have all the given ingredients at their beck and call throughout my property? Well, I don't actually think they will, but it gives a nice decorative touch for MY senses. On the other hand, if you don't have a bounty of wild things at your own place, perhaps you could obtain the ingredients from someone who does and make a native plant bird feeder to hang in your own yard...for those less fortunate "city" birds! Look at the two mine has attracted already! ☺
Posted by Loret at 5:27 PM 1 comment: Links to this post 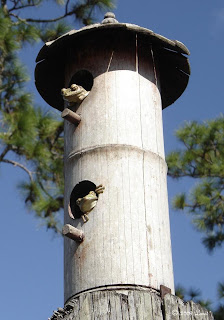 There is no denying they can be cute from a distance, but up close they are slimy and messy and can produce allergic reactions in people.
The Cuban Treefrog, (Osteopilus septentrionalis) a big name for a BIG invader which is threatening Florida's ecosystems as they eat and out compete our native species of treefrogs.  They hide in dark places and can short circuit electric lights or your water softening system threatening your pocketbook.
If you find them, euthanize them using the methods suggested by the University of Florida.  You can learn that and more about this invasive species at http://edis.ifas.ufl.edu/UW259
I've got seven in my freezer as we speak.
Posted by Loret at 12:00 PM No comments: Links to this post

Who knows what evil lurks in the garden 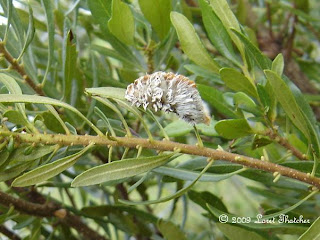 Background: Last Friday my Labrador wouldn't eat.  Now, for some dogs that might not be strange, but my lab?  It just doesn't happen.  I figured maybe he had a tummy ache and I've learned not to panic unless they aren't drinking water, which he was. I went about my business and later on when I returned home he was still out of sorts, but had eaten.  When I let him out he had terrible diarrhea and apparently he had thrown up out in the yard in the morning.  I put him on a diet of solid packed pumpkin (comes in a can) and monitored him.  It was a slow go, but he was improving.
Monday:  I was walking around the yard with the camera and noticed what I thought was some sort of cocoon.  I approached and took the above photo, headed in to the computer and went to whatsthatbug.com my favorite place to find out what bugs are.  I punched in "white hairy caterpillar" as my search term and found a similar cat which was listed as Megalopyge opercularis aka Puss or Asp Caterpillar.  I did some web searches and found out that it is "one of the most toxic caterpillars in North America".
A review of data from the following website showed a list of symptoms which sounded amazingly like what Blizzard had been going through.  I remembered that he had been in the brush close to the wax myrtle where I found the caterpillar.  My conclusion?  He was stung.  The information I have found stated that there are usually no ill affects after 5 days and sure enough, Blizzard was his old self by Tuesday, jumping and looking for his food.  I found another two of those caterpillars on the same bush and all three are now safely drowned in soapy water as was suggested as a way to exterminate them.
cites:  symptoms:  http://neuro.bcm.edu/eagleman/asp  you can find their full study in pdf form on this page.
first aid and extermination info: http://www.bugsinthenews.com/First%20Aid%20for%20Puss%20Caterpillar%20Stings.htm
second view of the caterpillar can be seen at:  http://twitpic.com/lihco
Posted by Loret at 7:12 PM No comments: Links to this post