Tribute to a Great Friend 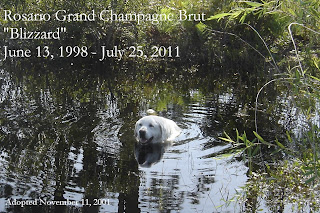 November 2001 was a rather tough time for me. My thirteen year old Irish Setter Mahogany was suffering from coronary problems and the end was near. While waiting for one of her tests at the vet's office, I perused the bulletin board and spied a plea for someone to adopt a 3 year old labrador retriever. After 3 years of allergy shots, asthma kicked in and the family pet had to go. I asked the vet if he was familiar with the pet and he advised it was a nice dog, well loved and cared for. And BIG! I wrote down the number, left with my setter and didn't give it much thought. The next day it was nagging at me and I thought I would just call and speak to the owners. After a brief conversation, I gathered my portfolio of pet pictures and headed off to meet a dog named "Rosie".
He WAS big...and adorable...and after conversing with the owner and sharing my pics, he told me he wanted me to adopt his boy. I said that I really felt he should come to my home and decide if the dog would be happy. The next day he came over, inspected the place and decided Rosie would be very happy with me. We planned the exchange, he would bring the dog and his gear over. Rosie arrived with leashes and food bowls and toys and food. And his pedigree papers announcing his name as Rosario Grand Champagne Brut. I could see the tears in the owner's eyes and I told him that I would provide the best home I could.
As I said, my Irish setter was very ill. I introduced the two dogs and Mahogany, in her Irish fashion, snapped at the new kid to let him know who was in charge of the household. Rosie merely went over to the couch in the family room and layed down. I decided that it would be best to allow my Irish some alone time to get use to the idea of a new dog, so I opted to have Rosie sleep downstairs the first night. During the night I felt maybe he would be lonely, so I crept downstairs and cuddled up with him on the couch. When I awoke in the morning I headed upstairs to check on the Irish. She wasn't on her bed and I immediately knew that something was amiss. I found her lying in the bathroom that morning....she had taken herself to the Rainbow Bridge. Somehow that girl knew that I needed another dog in my life before she would allow herself to leave. And I guess she approved of my new found friend.
My neighbor's name was Rosie and I wasn't crazy about calling my boy dog by a girl's name, so I started calling him Snow-zy, but the name just didn't fit. After sharing pictures of my new friend with the Colorado Cuties, my friend Janet (aka Liz) thought he looked like a Blizzard. I tried out the name and it stuck. It was a "cool", strong name for a "cool", strong boy.
Blizzard was a great dog. He listened and behaved at all times. He only walked on a leash because it was required by law. He was accepting of the little snit of an Irish setter (Chili) that we adopted in February 2003. He handled the move to Florida in June 2004 with ease. He made fast friends with all the pooches at the local dog park and was admired for his commitment to chasing only the blue colored ball and not the green one assigned to his sister. He didn't bat an eye when a new English Setter boy (Tanner) entered our family in August 2006. He always just went with the flow.
He loved to swim in the pond and as he aged I encouraged it to keep his limbs moving. When the pond got too low for him to get up the sides, I opted to have laser treatments to try and keep those legs moving and pain free. It seemed to help a bit, but return of the rains helped fill the pond and put him back in his hydrotherapy which worked better. He began to struggle with the stairs and then he began to struggle with getting out of the pond. It was becoming too much for him. We tried the pond one last time on July 20, 2011. He got out, but collapsed and lay on his side, the second time in a week that it happened. I knew it was his last swim. Without this fun in his life, it didn't seem fair to make him fight the fight any longer. He needed help getting up all the time. On Monday, July 25th, I watched him as he struggled up the stairs with my help. I told him he wouldn't have to walk up the stairs ever again. I called my vet and after feeding Blizzard half a package of Milkbone soft chews, I loaded him into the car. When we got to the vet, I gave him the other half of the treat bag while standing in the parking lot. Doggy heaven while still on earth!
He lumbered into the office and went peacefully to Rainbow Bridge with me at his side. While it pains me to have lost my friend, it really isn't about me. It is about him and the joy and unending love he gave me for the nine-plus years that we had together. Blizzard, you were a one of a kind and I can't thank you enough for all you gave me! I will miss you forever. 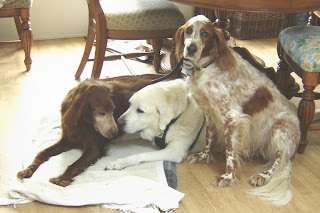 At the end he was surrounded by good friends.
Posted by Loret at 1:21 PM 7 comments: Links to this post