The Blur of the Butterfly -- Missed Opportunity 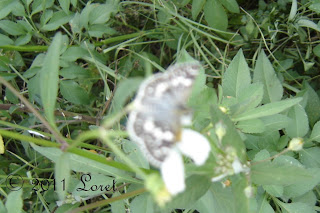 I was pulling up some plants (ok, you might call them weeds) which were not their designated area and I noticed at the bottom of one, a tiny green chrysalis, no more than a quarter inch long. I decided to put it in a display container to give it a chance since I didn't think it would survive otherwise (ok, and also cause I was hell-bent on learning what species I had found). 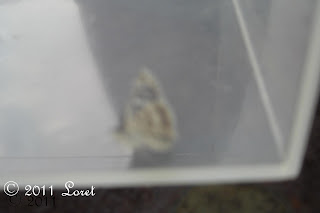 I taped it to the side, trying to maintain the correct orientation. An attempt at a photo of the tiny "speck" proved futile and since I had already taped the screening over the case, I just plain gave up. A couple of days later (I vigilantly checked daily), I was rewarded with a beautiful Checkered Skipper butterfly (Pyrgus spp. likely albescens) known as the white checkered. I quickly took a few photos and then released the little beauty where it happily flew off in the direction of the Spanish needles, where I took another few pictures. After he flew off into the sunset (ok, maybe it was a different time of day, but you know what I mean) I headed inside to the computer to see the results of my encounter.
CURSES…pictures all blurred. Usually I get at least one halfway decent shot but these were all blearily unrecognizable. I checked the camera and sure enough, I had the wrong setting. I usually leave my point and shoot camera with the macro setting on and I don't usually check it because I "always" return it to macro setting after taking a distance shot. Of course, except in this case :( 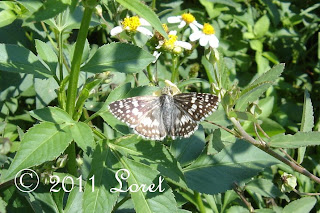 Luckily these butterflies use plants in the mallow family (Malvaceae) as the larval host and in my garden that means fanpetals or indian hemp (sida spp.). of which there are plenty. So, this may be a different butterfly who came visiting today, but at least you can clearly see how pretty these black and white guys are. It pays to have the camera set correctly.
Posted by Loret at 12:01 PM 2 comments: Links to this post